20 years of the Environmental Research Institute

20 years of the Environmental Research Institute

Twenty years ago when Bill Clinton was 42nd president of the United States, Tony Blair was Prime Minister and Britney Spears ‘Did It Again’ taking the number one spot in the UK singles chart. Meanwhile, change was in the air in Scotland: The Devolved Scottish Parliament was celebrating its first anniversary, and in the North the idea of a University in the Highlands and Islands was taking root.

In Thurso, the 9th of May saw the opening of the Environmental Research Institute by following a £1.6M sympathetic refurbishment of the former Victorian ‘West Public School’.  The North Highland College, as one of the partners in the University of the Highlands and Islands project (UHIp), had secured the funding package from the European Regional Development Fund and the Millennium Commission in partnership with Caithness & Sutherland Enterprise, and UKAEA, Dounreay. 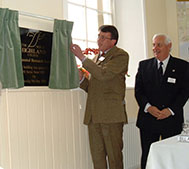 The official opening was performed by Jamie Stone, then the MSP for Caithness, Sutherland and Easter Ross in a celebratory event bringing stakeholders from around the region.

In 2000, the Institute was positioned as a multifunctional facility, capable of ‘undertaking research activities, delivering educational services and acting as a field unit and conference centre’.  Its original mission was to address the educational, economic, social and cultural needs and aspirations of the region through undertaking high quality research and educational activities.

Twenty years later, the ERI is still a centre of aspiration, one seeking ‘to be internationally recognised for distinctive and innovative environmental science’. It has developed strong, strategic partnerships and collaborations with academic, commercial and stakeholder organisations from within the region to around the world. Projects have ranged from a few thousand to several million pounds on subjects including environmental contamination, peatland restoration and marine energy.

The Institute’s forty staff and research students had much to celebrate with College and University colleagues at this 20 year landmark. However, amid the Covid-19 pandemic, events to mark the anniversary have sadly been put on hold, and instead we plan to celebrate our 21st birthday in good style.

In the meantime, we will share some stories from the past twenty years on our website (eri.ac.uk) and through twitter (twitter.com/ERI_UHI) using #ERI20years, and extend our immense gratitude to all the individuals and organisations who have contributed to, or supported our work over these years: It has been quite an adventure – thank you all !